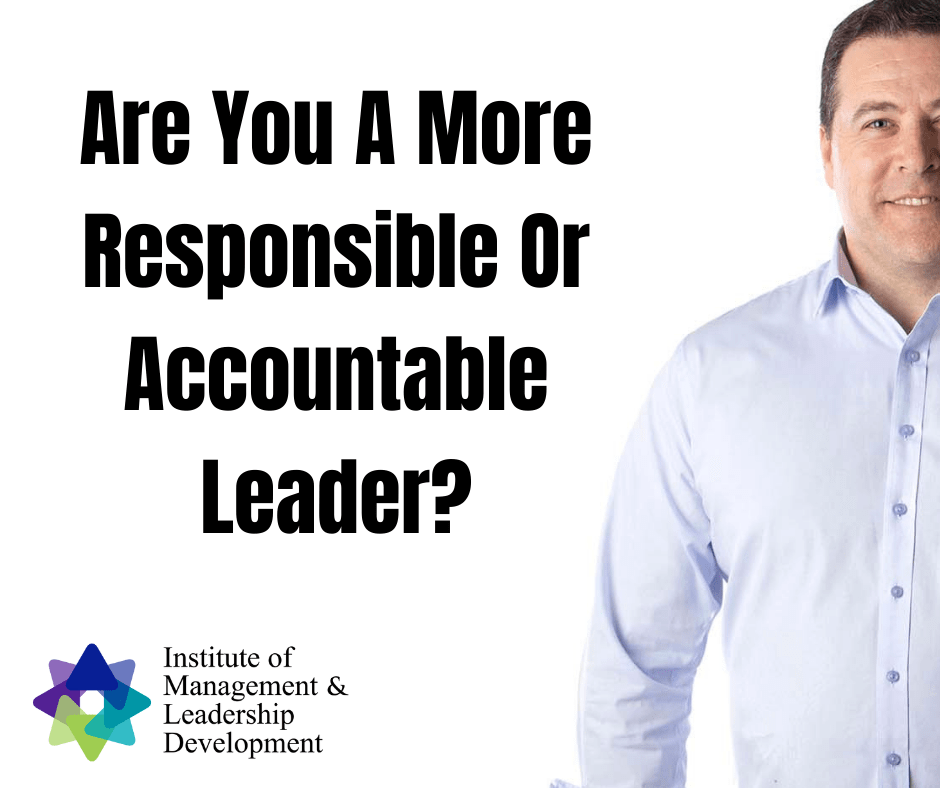 Are you a more responsible or accountable leader? When it comes to leading others, leading teams and leading high-performing teams, there is always a balance between getting your own work completed as well as that of your team. Often we can get caught doing all of our own work, and not paying attention tot he work of our team. Likewise, we can easily be focussed on the team’s work and needs, and leave our own work to the last minute.

So what is better? To be more accountable or more responsible.So that we are clear, let me explain the difference between responsibility and accountability.

Your responsibility focusses on your ability to hold yourself ‘to account’. It is ensuring that you keep the promises that you make to others as well as yourself.

Your Responsibility Score is one of 5 key behaviour traits within the Achieve leadership capability.

Your accountability focusses on your ability to hold others ‘to account’ It is ensuring that they keep the promises that they made to you and to others.

Leaders that demonstrate accountability are willing and able to hold someone to task for their behaviours and their actions. Lack of team accountability results in objectives and tasks being delayed, trust in team members eroding and the standing of your team diminished. A leader that holds the team to account achieves more and is more likely to be respected.

Your Accountability Score is one of 5 key behaviour traits within the Altitude leadership capability.

Ideally as a leader, you are aiming to be as responsible and accountable as you can be. The aim is to ensure that both you and your team are completely dependable – you deliver what you say you would, at the standard you said it would be completed, at the time you said it would be done by. In the perfect world, this would be done all of the time. But we don’t live in a perfect world! Factors outside our control can have an impact on both responsibility and accountability. Equally, factors within our control can have an impact as well.

A leader who struggles with the ‘uncomfortableness’ of difficult conversations is likely to be less accountable – they will let people ‘off the hook’ rather than having an uncomfortable conversation about getting a task completed.

Many leaders don’t have being responsible and being accountable in balance, and it can have impacts both on themselves as well as their teams.

Impact of Being More Responsible Than Accountable

Being more responsible than accountable can have detrimental impacts on both the leader and their team. Many new leaders have the trait of being more responsible than accountable – they are used to doing work for themselves and are unaccustomed to empowering or delegating to team members. This can become a chronic behaviour if the leader is incredibly task or goal focussed, and enjoy completing things for themselves (or struggle to let go of things). With poor communication, this type of behaviour can also be seen as micro-managing.

When the responsibility skills are more developed than accountability skills, the leader can think things like ‘it is just easier if I do this myself’ rather than teaching or guiding others. Over time, the leader can start to get resentful for the additional work and tasks that they have taken on (but rarely see that this is in part causes by their own behaviour). At the same time, the team can lose interest in helping the leader and get bored, as well as feel micromanaged on the tasks that they have been given (which are often menial because the leader is completing the more difficult tasks). Overall, a leader who is far more responsible than accountable can get work completed themselves (and feel overworked), and create an unhappy work environment.

Impact of Being More Accountable Than Responsible

Being more accountable than responsible can also have detrimental effects on the leader and the team. A leader with these traits holds their team to a greater level of account than they hold themselves which, over time, the team will become resentful of. No team member wants to feel that they are being taken advantage of – particularly when it is obvious that the team is working harder than the leader.

Importantly, the leader does not need to do the same things as the team – there are many times when the leader needs to focus on tasks / actions that only they can do while the team focusses on other things. This is about work rate and effort – and the team noticing that they are consistently working harder than the leader. In this setting, the team can quickly become resentful of working harder than the leader. At the same time, the leader can lose credibility and trust by expecting the team to put in more effort than they are. Overall, a leader who is far more accountable than responsible will create a poor work environment and most likely lose team members in the process.

Having both low responsibility and low accountability will most likely result in a leader not staying a leader for very long. They set low standards for themselves and for the team, and routinely miss deadlines and targets for both. While I am sure we have all experienced leaders that have low traits in both responsibility and accountability – very few of us would regard them as good leaders.

Want to Know if You Are More Responsible Than Accountable?

The Velocity Leadership CheckPoint measures 25 leadership behavioural traits, including Responsibility and Accountability. Knowing how you currently behave as a leader is the first step to making a positive difference in leading yourself and your team.

If you would like to know your scores and what you can do to influence them, get in touch with us today.