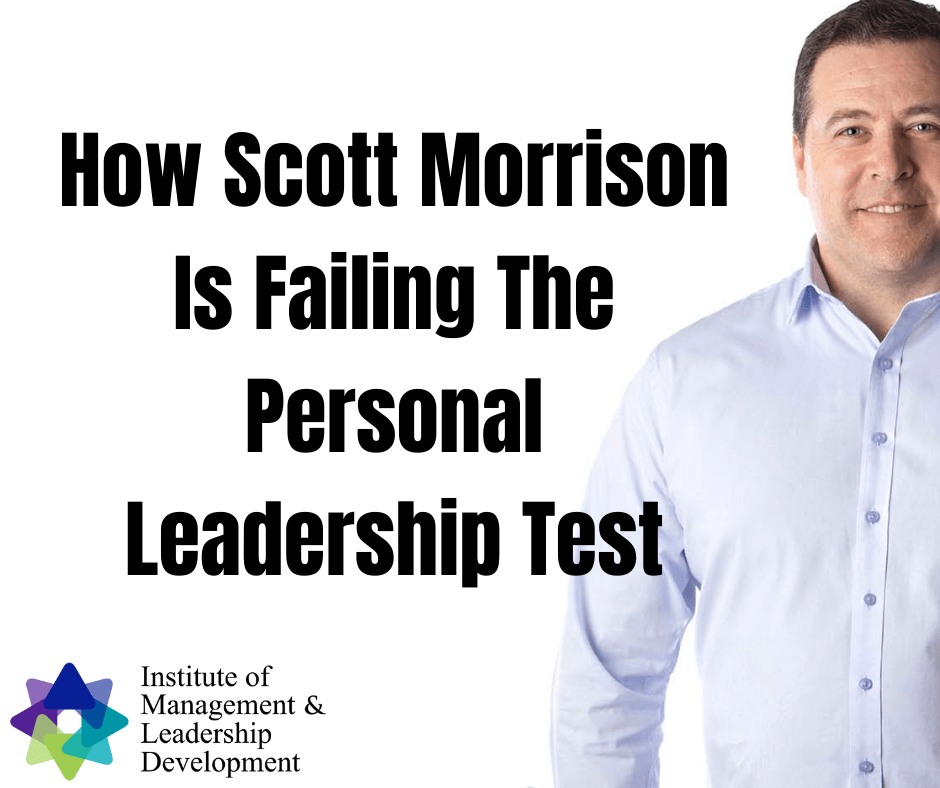 In short, Scott Morrison, Prime Minister of Australia, is failing the personal leadership test. This not only impacts his personal standing as a leader, but has profound impacts on all of his constituents.

My last Air Force post had the motto ‘Accept Responsibility’. It meant a lot to me then and framed how I tried to behave as an Officer and teach others, and it has framed my leadership business models, coaching, training and workshops at Institute of Management & Leadership Development.

Good leaders stay in the ‘positive’ against the acronym of the AIR/BLEEDS personal leadership model. They:

and they avoid as much as possible

❌ BLAMING others for their actions

❌ Being to LENIENT on poor behaviour

❌ EXONERATING and hiding from accountability

❌ Stay in SHAME rather than take action.

Personal leadership isn’t about perfection – it is about making conscious decisions that accepts responsibility for yourself, your team and your business.

How Does Scott Morrison Rate Against This Personal Leadership / Efficiency Model?

With AIR components, we look for scores as high as possible out of 10.

Despite a myriad of Ministers making large mistakes, whether it is in regards to dealing with rape allegations in Parliament House, rorting of the the public purse (‘Sports rorts), posting fake documents, not reading briefs on alleged harassment or rape allegations, not a single Minister (to date) has lost their office or been removed from office. As Leigh Sales asked the Treasure Josh Frydenberg on the 7.30 Report ‘How good does it feel to be a Minister in the Morrison Government knowing that no matter what questions arise over your conduct you job’s safe?’ This score would have been 0/10 if not for the recent sacking of staff for masturbating in a Ministers office (can you believe that is actually a sentence in 2021?). Scott Morrison’s accountability bar has been set very low.

The PM has a strong ability to create positive intention, as seen in his many press conferences on vaccine rollout, the state of the economy and announcements of aid for bushfires and flood. Significantly impacting this score is the ability to over promise and under deliver. The vaccine rollout is significantly behind target, the economy was in recession before the pandemic and the emergency relief fund has not spent a cent. Great intention, poor delivery.

With BLEEDS components, we look for scores as low as possible out of 10.

❌ BLAMING others for their actions. Score -3/10

With the exception of blaming the Opposition for many current failings (which is standard operating procedure for both sides of political divide), Scott Morrison doesn’t often blame others for his failings. He quite often fails to recognise his part in what has taken place, but blaming others cedes its place to other BLEEDS components.

❌ Being too LENIENT on poor behaviour. Score -9/10

This is one of Scott Morrison’s greatest personal leadership weaknesses. In any other Government in the last 25 years, at least 3 Ministers would have been stood aside for poor behaviour or inability to deliver in their role. Whether it is due to a slim 1 seat majority or an ability to hold to account, the PM is incredibly lenient on poor behaviour.

❌ EXONERATING and hiding from accountability. Score -9/10

It can be hard for others to hold you to account when you don’t acknowledge (or seek information) to look for wrong doing. In one sense, backing your staff is an incredibly good leadership trait. On the other, claiming the innocence of your staff without conducting any investigation and demonstrating a clear intent to ignore or disregard mounting evidence otherwise shows a clear desire to exonerate staff from consequences for their actions. While being too lenient on his staff and Ministers will have a negative impact, I believe the ability to exonerate and avoid scrutiny altogether will have a longer lasting negative impact on the PM if not addressed.

While Leniency and Exoneration or Deflection have much greater scores, the PM’s ability to make excuses are present, but not often mentioned. Often, the excuses are convenient or fit a timeline. The pandemic was used as an excuse for the Australia’s economic recessions (despite happening before March 2020) and the floods have impacted the vaccine rollout 9despite being behind before flooding). While excuses are present, they are not the greatest failing of personal leadership from the PM.

Not reading briefs on alleged rape allegations, not questions his own staff on their behaviour on backgrounding Brittany Higgens family for more than 3 weeks and the much used statement ‘I don’t agree with the premise of the question’ have become clear evidence of avoiding scrutiny and seeking to bury difficult questions. Add to that the obfuscation regarding investigations and a desire to believe his staff without looking into claims of negative behaviour, and you have a significant personal leadership problem.

This is the hardest score to assess from a distance – and I have no personal contact with the PM. Many others have commented on whether the PM feels empathy for those that have been on the receiving end of his or his Government Ministers poor behaviour, or whether it is political posturing. A key will be what tangible action is taken moving forward. Reviews, briefs and reports provide recommendations – how many of those that are willingly adopted will also impact on Scott Morrison’s personal leadership score.

An overall AIR/BLEEDS score of -29 is incredibly poor for personal leadership. To improve this score, Scott Morrison needs to be seen to hold his Ministers behaviour to account and set a clear set of Ministerial standards that are adhered to going forward, as well as addressing poor historical behaviour. In addition, deflecting and dismissing questions and responding in ways that are anything other than clear and easy to understand (ie. not using weasel words and clever language to avoid answers) will continue to have a negative effect on personal leadership.