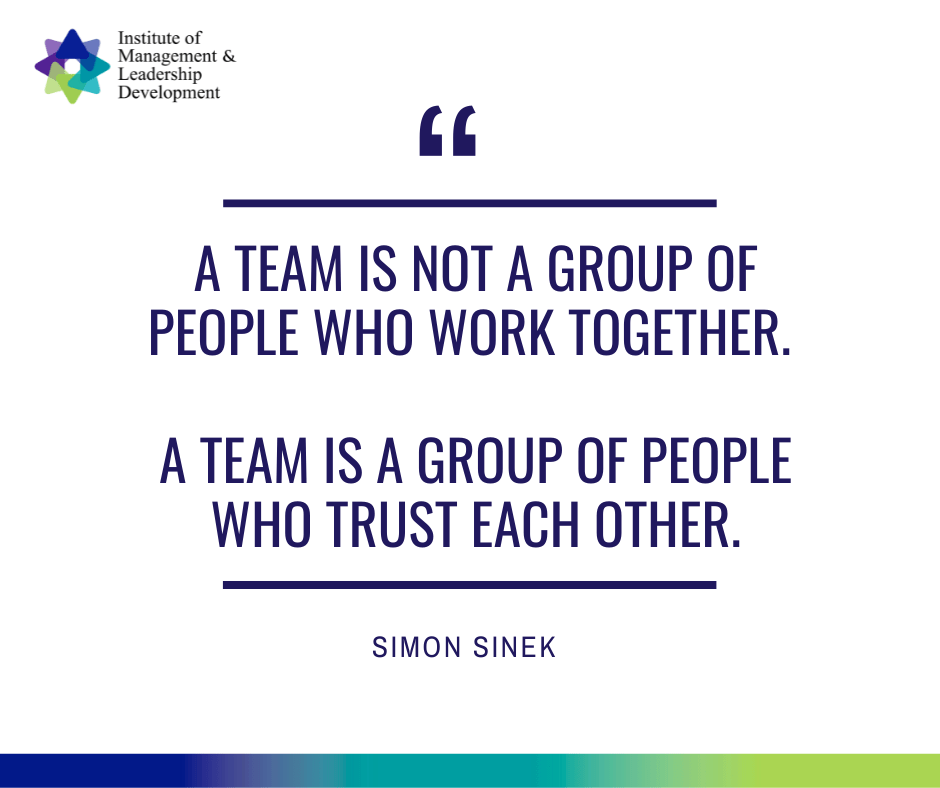 I agree with Simon Sinek – a team can be defined as a group of people who trust each other.

But what does it take to build trust?

What experiences need to be shared or what values / behaviours need to be agreed upon – to build that trust?

Many leaders assume that trust happens over time – and it can – but assuming it will happen is foolhardy. The other obvious problem with relying on trust taking time to build is – it takes time. It takes significantly less time to break trust – what has been earnt over years could be broken in a minute, with disasterous consequences for the individuals, the team and often the business.

So why do we speak about trust so much when it comes to team? 🤔

Why is building trust so hard?

Because everyone does not have the same trust tolerance or trust breaking points – if we did, trust would be simple to create and build. What one person may tolerate may be a ‘deal breaker’ for another when it comes to trust. When people come from different backgrounds, family experiences, work experiences, cultures, ethnicities and ages – we can’t assume that we all build and break trust in the same way.

Think about the friends, family, co-workers and team members that you trust. There is most likely a common understanding – a common set of values or behaviours that you have either consciously or unconsciously agreed upon. There will be a ‘right’ and a ‘wrong’ to certain behaviours – the ‘way we do it around here’. There will be common values that you share, and there will be ‘a line’ that should not be crossed without expected consequences.

If you want to build the type of team that Simon Sinek talks about – the ones that trust each other – then a starting point to get there is to have a discussion around what builds and breaks your trust. And it is more than honesty or not lying (a usual default answer).

Can trust be rebuilt with you?

A discussion on what it takes to rebuild trust is just (sometimes more) important than what it takes to build and break trust. Why? Because everyone makes mistakes. The question then is whether you will be judged for years for your actions or will you be forgiven and trusted again? In my experience, many small breaches started with someone not meeting someone else’s expectations – and they either didn’t know it or didn’t do anything about it. This includes the person who didn’t do what was expected apologising or correcting the mistake, and the person receiving not saying anything and holding a grudge. Such a simple action (which often happen daily in businesses) can result in a breach of trust that can last years between two team members. In fact, sometimes a lack of trust can last so long that the people involved can’t even remember what caused the lack of trust in the first place!

Where to start with trust?

If you don’t know how to start a conversation like this, or would like someone to facilitate this conversation as part of developing your high performing team, you know who to call.