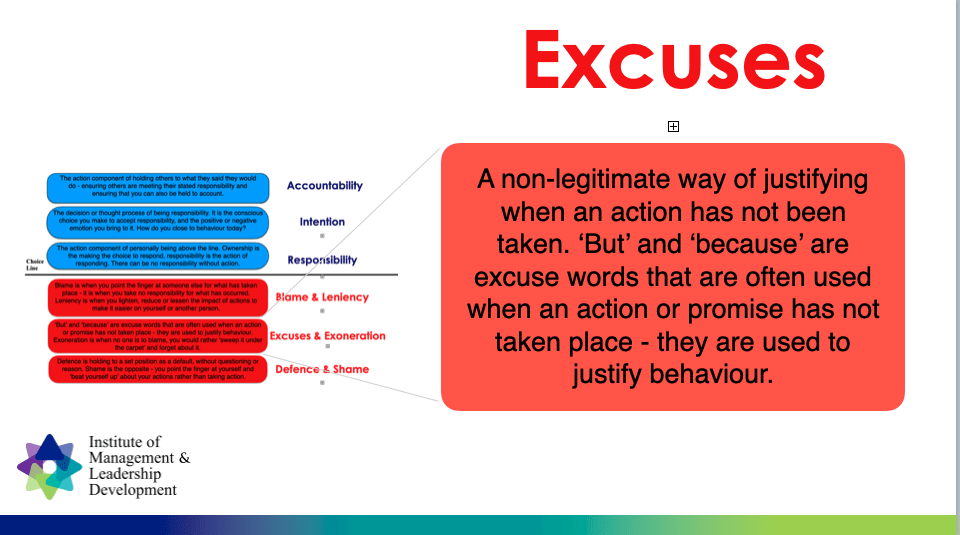 🤷‍♂️ Are you an excuse maker? Is your leadership hampered by the excuses you make?

Do you have an excuse maker in your team?Are you told supposedly ‘legitimate reasons’ for things not getting done, but they just sound like excuses? 🤔 Do you challenge them? Or do you hear them and look like you accept them – only to be annoyed that you ‘swallowed’ the excuse later? ?

Excuses are one of several ways in which teams / leaders underperform against the AIR / BLEEDS model – the others being Blame, Leniency, Exoneration, Defence and Shame.

Excuses can have a 3 fold negative effect on your team and business:

1️⃣. You lower your standards – particularly if you ‘accept’ your own excuses.
2️⃣. You lower the standards of your team. Accepting non-legitimate reasons for incomplete / lower standard / late work
3️⃣ You allow further excuses to breed. Having accepted an excuse once, you set yourself up to have to accept the same excuse again – or from others (setting a precedent).

Several leaders I have known have been told they were inconsistent (myself included) – not through intention – but by having to correct for excuses that were used too often / taken too far. While I / we may have seen that a ‘boundary’ had been crossed – the rest of the team just saw behaviour being accepted, followed by very similar behaviour not being accepted – inconsistency.

🤔. How do you get past excuses / deal with excuses in your workplace?

1️⃣. The first step to is acknowledge them for what they are – in your behaviour and in others – and you might be first place to start.
2️⃣. Make clear – to yourself and your team – the standards that you will accept and the standards you won’t.
3️⃣ Understand that ‘the standard you walk past is the standard you accept’. Excuses are often used because they are often accepted – many leaders are unwilling to challenge excuses – they hear them and rather than saying something, walk away and get annoyed about it later.

Is this a problem for you / your business? What impact are excuses having upon your business?
#leaders #business #work #team #developingleaders #IMLD