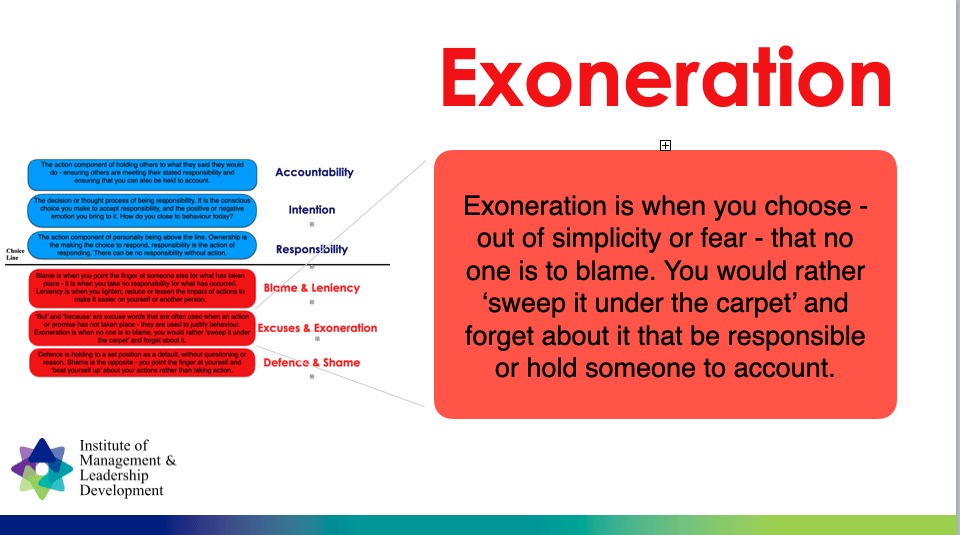 What is Exoneration in the AIR / BLEEDS model? It is exactly the opposite. It is becoming aware of behaviour or task that isn’t at the correct AND walking right past it, behaving as if the behaviour didn’t happen. This isn’t a case of not seeing it or having your head ‘buried in the sand’, it is choosing to ignore the behaviour and letting it go.
Exoneration is more prevalent than you think in business and life.

You don’t have to look very far in either State or Federal politics to see exoneration at work.
Someone is known to have committed a crime, a rort, an improper behaviour – and there are no actions against the behaviour and there are little consequences. The person doing it takes no responsibility, and the leader / boss does not hold them to account – and the improper behaviour continues because it has been tacitly approved. Exoneration is hope that the behaviour will be ignored and others will forget about it.

Exoneration can have a huge negative impact on a business – just as much as the other BLEEDS components of Blame, Excuses, Leniency or Defence. When a standard is walked past by a leader – you tell every other person in the organisation that it is OK.

Why do people exonerate others for poor behaviour? In my humble opinion, it is often down to fear. Fear of consequences, fear of a difficult conversation, fear of being seen as ‘management’, fear of not being liked and probably most often – fear of being ‘called out’ for exactly the same behaviour.
What can you do if you thin you might be exonerating others rather than holding to account?

1️⃣ Get very clear on what standard you want to uphold in your organisation / business. State very clearly what they are, and why they are important to you.

2️⃣. Hold yourself to those standards – and be very clear and upfront if you miss them. One of the key reasons people exonerate others is because they find themselves wanting in the same area and don’t want to be seen as a hypocrite – so they let both people (themselves and the other) off.

3️⃣ Be clear on the consequences of actions in advance.

If you would like to know more about exoneration – how to set, develop and communicate standards as well as hold yourself and others to account, send me a message. Setting clear standards and behaviours for yourself, your team and your business is not as hard as it might seem.
#exoneration#standards#leader#business#people#management#team#IMLD#developingleaders