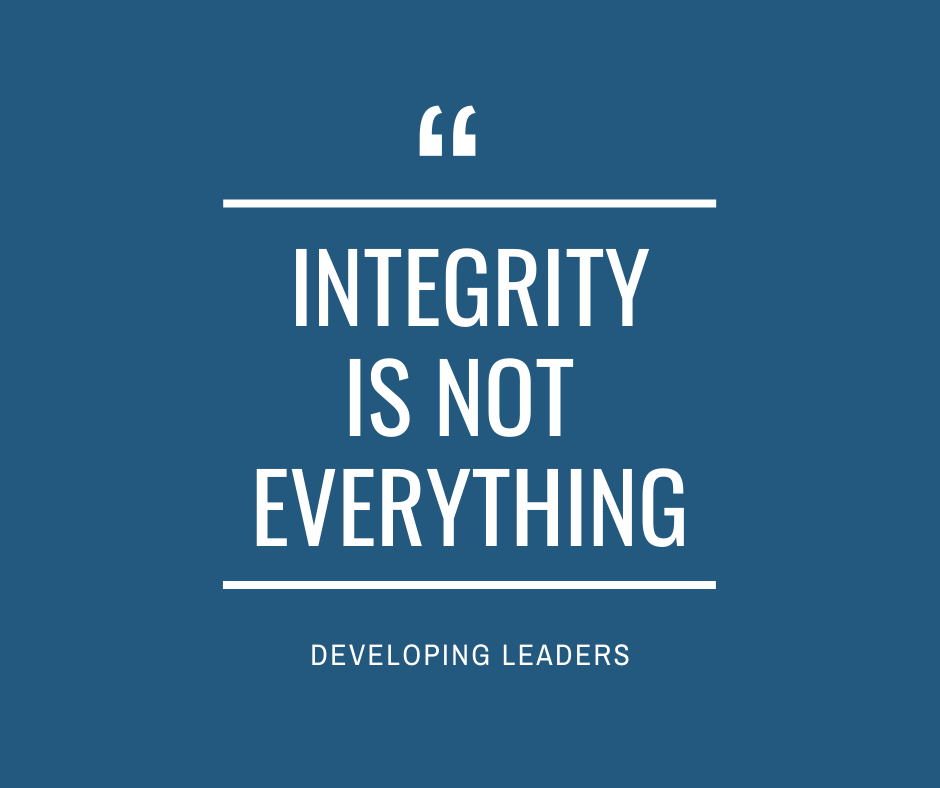 Integrity is not everything, and certainly not for developing leaders and leadership.

Integrity is one of the most overused and misunderstood words in the English language. While it is often conferred on great male and female leaders (‘Y is a person of character and integrity’) it is often used as a battering ram of judgement when someone has made a mistake (‘ X has no integrity’). In the 14 years I spent in the Air Force, I saw the term used extensively for both purposes.

If integrity is so important, why is the definition so misunderstood? In a recent article, I saw integrity defined as trust (or loss of it), influence, transparency, honesty and walking the talk – all of which are very different behaviours. Equally, I could say that integrity is being consistently responsible, dependable or accountable. In addition, I could say that it is ‘doing what you say you will do’. So which is it?

Even if you go the dictionary, it says integrity is ‘being honest and having sound moral principles that you refuse to change’. I think few would disagree with ‘being honest’ as a highly important behaviour we want everyone to display – but ‘sound moral principles’ are open to a large degree of interpretation. Who decides what is sound? Often the person doing the judging – who most likely is judging from their own moral compass.

In addition, integrity it is an absolute value – you either have it or you don’t – there is no partial integrity. Let me put this more clearly; given the definitions above, if you have ever lied, withheld some part of the truth, not been completely transparent or have not always walked the talk – then you have 0% integrity. That is one hell of a high bar to have set!

As an example: a boss goes into a meeting with team members and notices a mistake in the presentation he (the boss) has created. In front of others, the boss blames one of his team. The employee reconsiders the relationship they have with the boss, citing a lack of honesty (tick), a breakdown in trust (tick) and a lack of integrity (not sure?). From the team members perspective (and with a moral code of fairness, honesty and responsibility), they could be right. But did the boss lack integrity? If the boss had a clear value set of ambition, achievement and success at all costs – did he not act within his own integrity and do what he said he would do?

In my opinion, this is the problem with integrity as a value – it is too open to interpretation and judgement based on different ethical values. This is certainly the case when we make integrity judgements across cultures.

Personally, I find values such as responsibility, transparency, accountablility and dependability more effective (and far less subjective and judgemental) for developing leaders. The values listed are also growth values, meaning that you can be build on behaviours, rather than the ‘all or nothing’ judgement that discussions on integrity often bring.

Bound within cultural norms and within a common understanding, the use of integrity has a place in defining leadership behaviour. But if you want to leaders to grow and understand the behaviours that generate influence and engender trust, then integrity certainly isn’t everything.