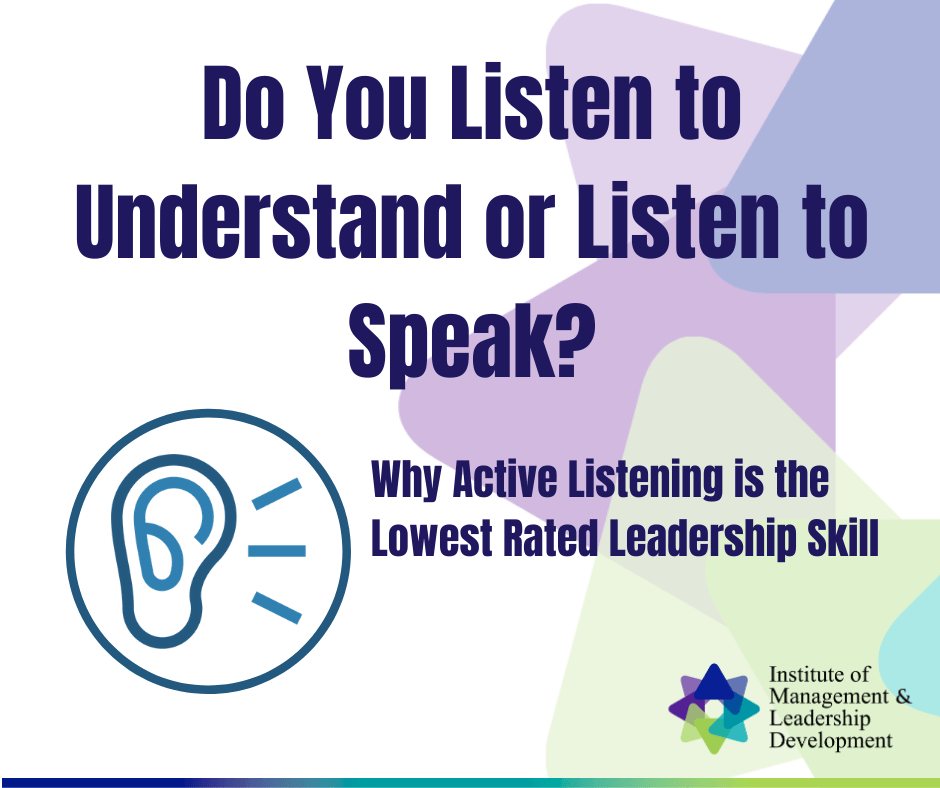 Speaking and listening are basic human skills, but in a leadership sense, we expect so much more from our leaders than the basics. In our recent review of Velocity Leadership CheckPoint results, Active Listening rated the lowest of the 25 rated leadership skills.

I believe that active listening scored so low amongst leaders for several reason, but most often, because leaders listen to speak rather than listening to understand.

Many leaders in meetings focus their attention on what they are going to say next, rather than actually listen to what their team members are saying. This isn’t active listening, this is listening for speaking. When a leader is actively listening to their team, they will often pause to consider what has been said, and then response with a question or affirmation rather than a statement.

Another poor trait of leaders that reflects in the low active listening score is cutting off team members when they are speaking. I have worked with many leaders that say they are busy and would like their team to ‘get to the point’ when speaking. Leaders can often feel frustrated with the pace of a conversation, and seek to interject and ‘cut in’ on team members when they think they have the gist of the discussion. More often than not, team members will feel like their leader has not listened to what they were seeking to say, and their actions demonstrated that they don’t want to. What is often seen as efficiency by the leader is seen as not caring by the team member.

Addressing your active listening skills is quite a simple task – if you decide that it is more important than the next thing you want to say. Listen to your what you team members says – take a breath – take in what has been said. Ask a question about what has been said that demonstrates that you understood. Paraphrase what they said and ask what they would like to do next.

Listening is not a complicated skill – yet it takes effort to TRULY listen to what is being said by your team. Demonstrating anything less to your team looks like a lack of attention and a lack of care and concern for their opinions – which is exactly what it is.