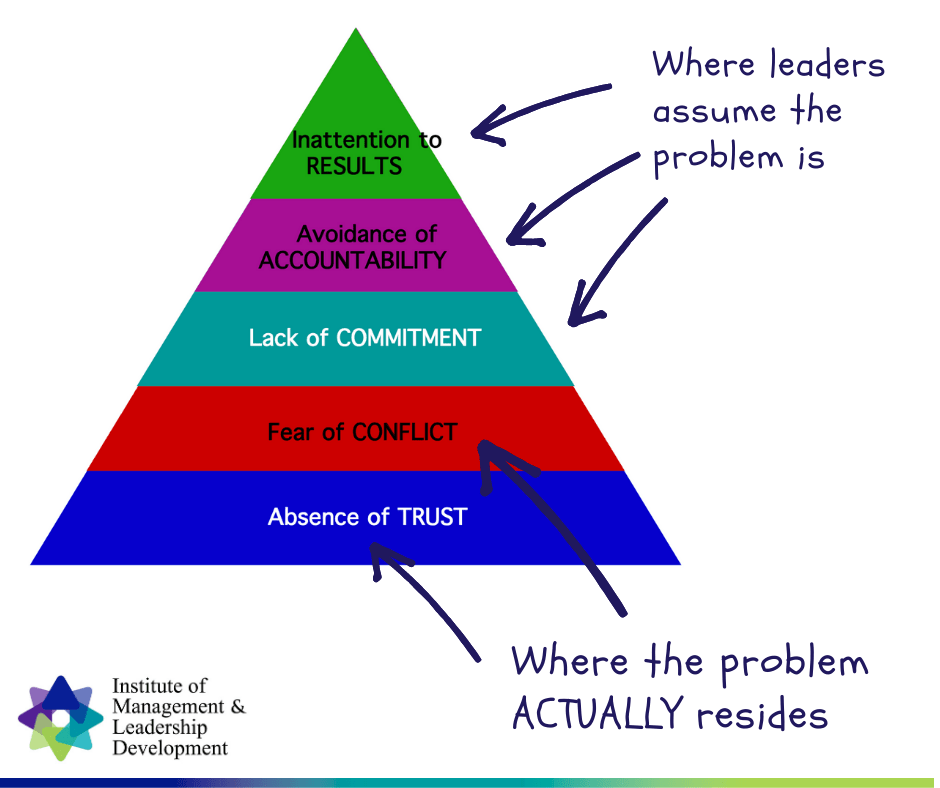 What is one thing that CEOs, leaders, managers, supervisors and small business owners have in common? When they are trying to work out why their team is not performing at the level it could (and should), they often go looking in the wrong place.

They know the signs and the symptoms – tasks not being completed on time, a culture that doesn’t feel ‘quite right’, large turnovers of staff and profits not where they were expected to be.

You know the old adage, ‘start at the bottom and work your way up’? It almost always applies to poor-performing teams and explains why they are not performing at the level they need to, when you refer to Patric Lencioni’s team model from his book ‘The 5 Dysfunctions of a Team’.

In my experience as a leadership and team dynamics executive coach and facilitator over the last 15 years, almost all issues with team start at the very bottom of the triangle – absence of trust. Unfortunately, when looking at poor performing teams, leaders often don’t want to start at the bottom and work their way up – it is easier to start at the top and blame your way down.

Blaming teams for poor results – and saddling with it a lack of commitment of just a general lack of accountability – fails to look at the deeper problems with in a team. These failings – an absence of trust and a fear of conflict, often have a lot to do with the style of leadership employed by the supervisor / leader and the tone and culture that they set for the rest of the team.

We have all seen this behaviour. In fact, many of us have done this behaviour. It doesn’t start out as big – but over time, simple behaviours that such as those above, particularly WHEN THEY ARE NOT DEALT WITH OR RESOLVED – create a lack of trust that has a direct impact on the team and its performance.

In the next Blog Post – we will discuss how this Absence of Trust permeates into a Fear of Conflict – which often starts and and ends with the behaviour of the leader.